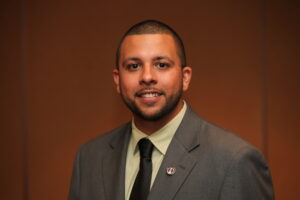 Prof. Jesús M. Velázquez received a B.S. in Chemistry from the University of Puerto Rico, Cayey in 2004 before working as a chemist in pharmaceutical industries until 2007. In 2012 he received a Ph.D. in Chemistry from SUNY-Buffalo under the supervision of Prof. Sarbajit Banerjee and began working as a Ford Foundation Postdoctoral Fellow at the California Institute of Technology under the mentorship of Prof. Nathan S. Lewis. He is currently an Assistant Professor in the Department of Chemistry at the University of California – Davis (UC-Davis). Velázquez has received several awards while at UC-Davis, including a CAMPOS Faculty Scholar (2016), Scialog Fellowships in Advanced Energy Storage and Negative Emissions (2017 and 2020), a Cottrell Scholar Award (2020) as well as the National Science Foundation CAREER Award (2020).

Back to #BlackInNano Week Schedule